There are some things that I make that are almost painfully simple.  And after reading some of the blogs this past week with all the complicated recipes — from liver pate to potato confiet, I really am almost embarrased to post this recipe.  But.. I’m a simple cook, for the most part, and sometimes the simple things are just fantastically yummy.  This is one of those recipes.

We (and by “We”, I mean my son and I), are trying to create some new traditions, and make new memories.  It’s been hard after the divorce to not be saddened by what /was/, and instead, be happy with with /is/.  And so I decided to do some new things this year, one of which is to make some different foods.  This recipe, though I have made it in the past on occasion,  is not something I would normally make.  First, I don’t often use refrigerator rolls, and second, it’s rather too much for the two of us.  But it is Christmas, and I did want new/different foods.

This version of Monkey Bread, aka Pully Bread, Pull Apart Bread, Picky Bread, Pinch Me Cake – whatever you may know it by, (and in the end, whatever it is you choose to call it), is ridiculously silly easy.  With the plethora of names this recipe is known by, there are 1000x that many versions of this recipe.  I bring nothing new to the recipe whatsoever.  It just happens to be what I decided to make, and to share here. Listed below the recipe are a few other versions.

With supervision (the caramel/syrup is just  too hot for little ones), this version of the recipe can be made by kids, and takes only about 10 minutes..maybe 15 minutes from start of prep to entry into the oven. 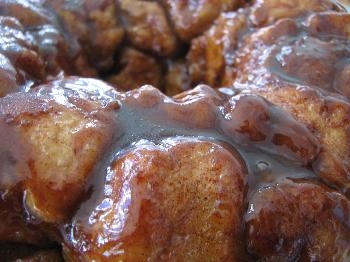 3 12-ounce tubes refrigerator biscuits, or rolls (like the Pillsbury type) (or a double recipe of your favorite yeast bread)
1 cup sugar
3 tablespoons cinnamon
1/2 cup butter
1 1/2 cup brown sugar
1/2 cup chopped pecans (up to 1 cup, if you like, and I do!!)
1 tablespoon cinnamon
1/2 cup raisins, dried currants, or dried cranberries (or similar)

Open the tubes and remove the ready-to-bake rolls or biscuits.  The object is to cut each piece into 4 pieces.  I try and remove the rolls from the package all in one full roll, slice longways in half twice, making 4 long pieces, and then pull them apart into the quarter section.

The traditional pan to use is a “bundt pan”.  I don’t happen to have one, so I used a disposable aluminum pan – a double long bread pan

size. (as shown here). Spray well with ‘Pam’, or oil well with vegetable oil and set aside.  You don’t want to use a regular bread pan size as it is too small for this recipe – it needs to be double long.

In a ziplock bag, pour in the 1 cup of sugar, and the 3 tablespoons cinnamon.  Zip it closed and shake it to mix.  Put 1/2 of the cut up biscuits/rolls into the bag, zip to close, and shake until all the pieces are well covered. Put these pieces into the pan.  Get the remaining pieces ready to go, by putting them into the ziplock bag.  Shake them, and leave them in the bag for now.

Meanwhile, put the butter and brown sugar into a saucepan.  Stir often, and then, once the butter and sugar start to melt, stir until the sugar is dissolved.  Boil for about 1 minute.

Bake at 350F for 40-45 minutes.  Once this is done, remove from the oven and allow to set at least 10 minutes.  Turn out onto a serving dish or platter.  This will be VERY hot, so be careful.

Other Monkey Bread recipes of interest: