The Fun Of Cooking

I write another blog — one that Sander and I just started, and our topic this week was about cooking, so I thought I would post my part of it here.  To read the full article, and Sanders part of this article, go to Beer or Wine – Two Continents, Two Countries, Two People, Two Opinions – One Blog.

The Fun Of Cooking, from Beer or Wine

When my mother was around 9, her own mother died. Being the girl of the family, with her father and brother as the males (and it being 1957, to boot), she was left to the cooking and cleaning.  She learned to cook a few good dishes, and, when she had visits with her Grandmother (rarely, as they lived about 700 miles apart), she was taught a bit more. Instead of being happy about cooking, she learned to hate it.

So, when I was old enough to have an interest in cooking, she let me make cookies, cakes, pies, breads and such.  But she didn’t teach me how to cook meals.  She didn’t want me burdened with having to cook.  About the only thing I did learn, other than how to bake (because that was a fun thing to do, according to her), was to prep vegetables and make popcorn.

Lets just put it this way – I could peel a potato really well, prep vegetables so that they look amazing, and I was an expert in the art of popcorn making.  When I first moved to New York, not knowing how to cook anything, I lived on popcorn and Dr. Pepper for about a year.  I still love popcorn, and can’t live without my Dr. Pepper ;)

I remember very clearly, one of my roommates in tears over my preparation of Kraft Macaroni and Cheese.  I didn’t realize the water had to be boiling /before/ you put the macaroni in the water.  I ended up with a gluey mess that really wasn’t edible for most people, but being so hungry that I ate it anyway.  Anna, the roommate I mentioned above, taught me some of the basics – that you need to boil water before the macaroni is put in, that letting an egg sit in the pot full of warm water for about 10 minutes before you actually cook it, bringing the egg and the water to the same temperature, kept the egg from splitting and cracking when it was boiled.

Once I got married, I learned a whole new lesson – I knew next to nothing about cooking and my husband expected actual meals, as if by saying “I do” at the alter, it immediately made me a cook.  My whole experience of cooking up until then consisted of using a can opener to “make soup”, pre-packaged “add milk & butter, mix, heat  and stir” meals.  I didn’t know the difference between elbow, lasagna, or ziti pasta.  I didn’t realize that sausage for dinner was not the same thing as breakfast sausage.  And the only way I knew to cook chicken was to bake it with a can of some condensed cream soup. 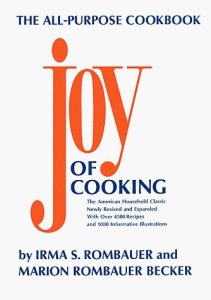 (1975 version of the book), and Better Homes & Gardens Cookbook.  I began reading The Joy Of Cooking and, though I really wasn’t interested in some of it (Sweetbreads, for example), it did teach me a lot.  I followed recipes literally and very exactly, with no deviation whatsoever.  I would pick up a cooking magazine, or a new cookbook every once in a while, and make a new recipe, or ask people for theirs.

Once I got familiar with cooking, I was still afraid of it.  It literally made me nervous.  I was always afraid what I cooked would come out terrible and I was unsure of techniques that the cookbooks talked about.  I didn’t understand even the simplest things – braising vs broiling, boiling vs simmering, saute vs frying.

I started to watch cooking shows, most notably, Emeril.  Though I really didn’t care for how he presented his show, I learned so much from him.  Namely.. how *not* to be afraid of cooking.  He made food seem fun.  He, it seemed, would just throw ideas together, and come up with good food.

But by far, the person who taught me to lose my fear of cooking forever was Alton Brown.  I’m one of those people who *need* to know What, Where, When, How and Why for everything, and Alton Brown, on his show “Good Eats” teaches just that.  The show can be silly, is always quirky, but is always full of useful knowledge about the what, where, when, how and why.  I’ve watched him since the very first episode 12 years ago, and always have fun learning new things.  Or just watching his interaction with “Thing” ;)

About the same time I discovered Alton Brown, I also discovered a magazine.  I was always buying cooking magazines, which were filled with hundreds of recipes.  There was usually some theme to the recipes, but these magazines always made me feel as if I was missing something.  One afternoon, I picked up Cooks Illustrated, took it home, and read it cover to cover.  The magazine contains no advertising at all, and usually contains between 10 and 15 recipes.  Not a lot at all.  But what the magazine lacks in quantity of recipes is by far made up for with the quality of the recipes themselves.  A typical recipe is given after a lengthy discussion about how the recipe goes together, how the author of the article made the recipe, what changes were made to it, and why.  And How.

So, between Alton and CI,  I learned cooking terminology, about pots and pans, knives and whisks; how to mix spices and herbs to create amazing flavor, why flavors work, and what flavors don’t, but most importantly I lost my fear of cooking and learned to love it.  And to love to experiment.  I would challenge myself to create new recipes, trying new things, with old things, and seeing what worked, and what didn’t.  I really had a lot of fun, and still do.

I’ve found out, over the years, that cooking is one of the things that makes me who I am.  I love to cook.  I’ve cooked for crowds of 75+, I’ve cooked 7 course fine dining type of meals; I can make fun and interesting amuse bouche; unusual appetizers that people actually beg for more.  But for the most part, I’ve learned to love simple foods, good flavors, create interesting ideas, and I’m never afraid to try something new.

Mexican food has always been a favorite of mine, and I enjoy making that type of food a lot, but I’ve learned to cook everything from Cuban, Brazilian,  Asian — Chinese, Korean, Thai, to Italian, Greek, Portuguese, and of course, a lot of regional American.

I’ve taken a couple of cooking classes, too.  Intro to Basic Cooking — where I learned why Kosher Salt is so much better to cook with, in certain dishes, and how to slice a tomato, and Knife Skills, where learned that a sharp knife won’t cut me and leave a bloody trail across the kitchen.  And Asian Fusion class — which wasn’t really my cup of tea, since the “Fusion” was French, and I’m pretty much a Non-French Food kinda person.

Since my divorce, I’ve cooked less — less people to cook for, but when I do cook, I have a blast doing it.  I have been teaching my son to cook over the last 2 or three years, and last year, I was persuaded by Sander to create a blog for my recipes.  I really enjoy sharing what I have learned, and the recipes I’ve created, or just recipes that I love there.

Madam Benoit says exactly how I feel about cooking:

“I feel a recipe is only a theme, which an intelligent cook can play each time with a variation.”

I guess, in conclusion, cooking, for me, is just a fun expression of myself, in the same way art is.   It can be masterful, or just ordinary, but it is always interesting.

I write two blogs - This Food Thing, (www.thisfoodthing.com) and This Life I Lead (www.thislifeilead.wordpress.com).
View all posts by Michie →
This entry was posted in Uncategorized and tagged food, fun of cooking, Misc. Bookmark the permalink.