Yesterday I wrote about making deep fried tacos.  When ever I do this, I always make Tortilla Cinnamon Crisps.

I hardly ever deep fry anything, so when I make the tacos, I always make Tortilla Cinnamon Crisps with the leftover tortillas.

These were always available at the Mexican restaurants I grew up with — as a dessert or as a snack.  Even Taco Bell has something similar, though I don’t think they use tortillas, but some sort of light, fried dough, iirc.

These are great on their own, but so good with vanilla ice cream, or served with baked apples. 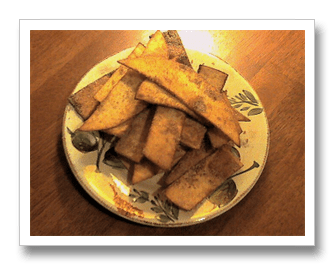 Slice the tortillas in strip.  If they are too long for your pot, cut them in  half.

Heat the oil, and fry the tortilla pieces, until golden brown on  both sides.  Flip once during frying.  Remove from the hot oil, drain for a second or two, and then immediately put into the cinnamon/sugar mixture.  Cover and remove to plate.

I write two blogs - This Food Thing, (www.thisfoodthing.com) and This Life I Lead (www.thislifeilead.wordpress.com).
View all posts by Michie →
This entry was posted in Desserts and tagged cinnamon, crisps, Desserts, tortilla. Bookmark the permalink.