If you are a ChiliHead, you’ll probably flame or faint. You are going to read about my Chili recipe.

Yes.. it’s a sacrilegious version. Yes, it contains tomatoes AND beans. And yes, I am sharing the recipe!!

I grew up eating a version of chili similar to the recipe below – it contains tomatoes, it contains beans. Get over it. To me, chili just doesn’t taste the right way without beans. I’ve tried chili with pinto, black, red, and every other color bean. My favorite is still red kidney beans, though black beans are a very second.

Oh. And I don’t like it so spicy hot that I can’t breathe, either. I like to taste it! So, if you are looking for a chili recipe that cuts your taste buds off, this ain’t it. What this recipe lacks in heat, it makes up for with balanced flavors that make your palate delighted that you can read a recipe, and follow directions.

Chili recipes are subjective. They are argued over and debated. The recipes are kept so secret even just asking “What makes this taste so divine?” can get you banned from a booth at a contest. I met a gentleman a few years ago at a chili contest in upstate New York, who told me his recipe was his great- great- grandfathers recipe. Only the men in the family knew the recipe, and only on their deathbeds, or in a will, actually gave the recipe to another person. Held secret, and close, nobody in the family knew how to make it, except the oldest male. It was handed down this way for generations. He received the recipe on a very yellowed and thin paper that almost crumbled in his hand. The recipe had been lightly written in pencil, the ingredients almost unreadable.

He had done things a bit differently than his father and grandfathers, though. After he had the actual recipe, he had the paper restored, and protected. He then stashed this precious recipe in a safe deposit box at a bank. Upon his death, the key goes to his son, and the recipe handed down another generation. This secret recipe had won many a contest, and was a hotly demanded favorite at family functions, as well as by the home community of this gentleman.

There are contests all over the world, from the annual Chili-Cook-Off in Antarctica, to the cook-offs in Australia. Canada, Finland, Great Britain, Hong Kong, Iceland and more. There are hundreds in the US alone. If you get the chance to go to a Chili Cook-off, do it. Besides the chili, you’ll usually find some amazing cooking going on – smoked ribs that are simply divine, pulled pork that you just cannot get enough of and beer – everything from the very basic “Budweis”? to micro-breweries serving local-made beers.

According to the International Chili Society, there were 211 Chili Cook Off Contests in the US in the year 2006. And they don’t list /all/ the contests and fairs. I’m pretty sure you can add at least 300 more small contests to that list and still be way off.

Although the recipe below won?t win any Chili Cook-Off contests, I hope you try it, and enjoy it. Change it, too, and make it your own. 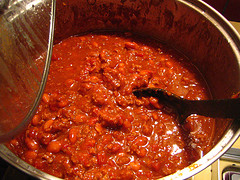 Saute garlic and onion in oil until tender. Stir in ground beef and cook until no pink remains. Drain.

After first hour, add seasonings. Continue to simmer another 1 1/2-2 hours.

Serve with fresh onions and cheese.

The small onion is for garnish/serving.