I no longer have access to a grill, unfortunately.  I have missed it quite a lot.  I used it year-round.. nothing like chicken hot off the grill in mid-January.  The ease of a gas grill made using it year round so simple, and an extension of my kitchen.

But since I don’t have any way to actually have a grill any longer, I’ve been using my oven broiler.  It’s taken a bit to get used to, because there are things you just, simply put, cannot do.  Nothing has that – just-off-the-grill flavor that I miss.  You do not get that smokey flavor of wood, and tbh, who wants a broiled hamburger, anyway>?

One thing I always loved to grill was pork chops.  Pork chops, for those not from the US, are basically, a center cut or rib cut loin chop.  They are great for hot and dry cooking and just made for the grill.  Or broiler, as it turns out.

I never really had success using a gas oven broiler – the moisture that it held just never gave food that taste I was looking for.  Moving into this apartment in May, I’ve had to give up having a gas stove and oven and have been using an electric.  It’s taken a while to adjust to — the stove never gets as hot, and you cannot control an electric as you do gas.  Let’s just say it’s been an adventure .. and I’ve needed elbow grease on more than one occasion to clean a pan.

But I have found that the oven part of this contraption works splendidly for baking, and for broiling.   The dry heat of an electric oven seems to produce food that is crisper, more evenly cooked, and it never has that.. underdone taste to it.

I’ve adapted a favorite pork chop recipe that I always used on a gas grill to oven broiler use.  I don’t know what your oven is like, and you’ll have to adjust the times, but generally speaking, this is a quick cook.

Mix together all the ingredients, except the pork chops.

In a plastic bag, such as a ziplock,  put in the pork chops and cover with the marinade.  Try to get as much air out of it as possible, and then smush it around, turning it a few times to get all the pork covered and the marinade distributed as evenly as possible.  Stick it in the refrigerator for about 30 or so minutes, but no more than 4 hours.  Don’t do this over night or the pork will be inedible.

About 40 minutes before you are ready to cook the chops, take out of the refrigerator and bring up to room temp. 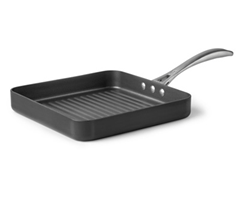 If using a broiler, turn it to highest setting.  Put the oven rack at the second place down (not the top place just under the broiler), about 6-8 inches below the heating element.  I use either the broiler pan that usually comes with the oven, or a grill pan (as shown).

If using a gas grill, cook over direct high heat for about 5 minutes or so.  Turn once, at the 3 minute mark, then move the pork chops to indirect heat and cook about 7-9 more minutes.

Pork chops come in all sorts of cuts these days:

I don’t suggest using anything but bone in, and no less than 3/4 inch thick, no more than 1 inch thick.  If you go any thicker, the chops will dry out.  If you go too thin, the chops again have a tendency to become dry, though it can be done if you are careful and time it well.  I usually just go for bone in, 3/4 inch thick.  There are other ways to use the thicker chops, but this particular application, either under a broiler, or on a grill just is not it.